Although they are a cold-tolerant crop, University of Georgia Cooperative Extension research has found that, in order to grow to maturity, Brussels sprouts would have to be planted in late summer, when temperatures are too high.

“I think it’s going to be difficult to make this a commercially viable crop,” said Justin Shealey, UGA Extension coordinator in Echols County. “There are a lot of hurdles we’re going to have to figure out before we can get to that point.”

Coolong believes Brussels sprouts would be greeted by an “attractive market” in Georgia, but agrees the unpredictable weather patterns and labor required to farm the vegetable makes the proposition risky. The crop’s uncertainty due to Georgia’s weather also means the use of a mechanical harvester may not be feasible, Coolong said.

“Out in California and other places, they have the growing system and weather in place where they can get a uniform crop of sprouts on a stalk. Mechanical harvesters are a very reasonable option for them,” Coolong said. "The cost of a mechanical harvester is prohibitive without having a significant amount of production in place. It’s one of those things where people have been unable to make an investment, but at the same time, (harvesting) by hand is not an economically good option. There’s just too much labor involved.”

Brussels sprouts plants look like collard plants until little sprouts emerge where leaves come out of the plant. To help the plant produce sprouts, workers must cut the tops of the plants to force the plant to put resources into sprout production.

Workers must remove the plants’ leaves through a process called “kiting.” This allows energy to move into the sprouts instead of leaf production and increases airflow to the plants, which reduces disease pressure.

During harvest, Shealey estimates between 30 to 40 individual Brussels sprouts must be harvested from each plant. Between 3,800 and 4,000 plants are grown per acre, which leaves an unenviable task for a grower and his farm workers.

“How many workers are you going to have to have, and how long is it going to take you to pop all those sprouts off?” Shealey said. “That’s a lot of labor that growers have to account for when considering this crop.”

Brussels sprouts can grow in the spring, but Coolong believes they would perform better in the fall. He worries that the heat that accompanies late spring in Georgia would slow growth, but he admits more research is needed to verify that theory.

If research did show that Brussels sprouts could grow in Georgia’s fall temperatures, the crop’s lack of uniformity would remain a problem, Coolong said.

“There’s such an interest in buying regionally. Most of our vegetables, especially Brussels sprouts, are coming from California or maybe out of Canada. If our East Coast customers could actually get products from Georgia in a reasonable window of time, I think the market would be wide open,” he said.

Shealey and Coolong warn Georgia farmers who, despite the risks, try to grow Brussels sprouts that there is a lack of labeled chemicals for control of insects, diseases and weeds.

Clint Thompson is a news editor with the University of Georgia College of Agricultural and Environmental Sciences based in Tifton.
Authors:
Clint Thompson
Experts/Sources:
Tim Coolong
Justin Shealey 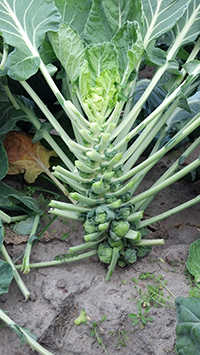 Stay on schedule to maintain healthy turfgrass Posted on 07/23/20 by Emily Cabrera
With the heat of summer bearing down on us, University of Georgia Cooperative Extension turfgrass specialists recommend that residents stick to a schedule for healthy lawn maintenance.
See More News Subscribe for Updates