As yield grows, Georgia citrus producers need to be wary of potential diseases

The citrus greening disease that has devastated Florida’s industry over the past decade is not affecting Georgia production, but growers should still be aware of the potential danger it can bring, according to Jonathan Oliver, University of Georgia Cooperative Extension fruit pathologist.

Georgia’s citrus crop is expected to double in size this year. As growers continue to plant more trees originating from out of state, Oliver cautions growers to purchase plants that are certified by the U.S. Department of Agriculture. This certification protects farmers from purchasing trees infected with citrus greening (also known as “Huanglongbing,” or “HLB”) and helps prevent the disease from becoming a problem in Georgia.

“If there is one thing right now that Georgia growers should worry about with respect to this disease, it is where they are purchasing plants to start their groves. Growers should be planting clean plants,” Oliver said. “Fly-by-night propagators can really hurt the industry in the long run if they are distributing HLB-infected materials (or materials with other diseases).”

HLB is spread by the Asian citrus psyllid, an insect that feeds on the plant’s foliage and transmits the bacteria that causes the disease. Oliver says that if the Asian citrus psyllid becomes established in Georgia, it will transfer the bacteria from one tree to the next. He believes Georgia producers can guard against the disease, in part, simply by not purchasing low-quality plants.

“Even though plant material from some providers may be cheap, that doesn’t mean it is good and, ideally, we should be establishing clean plantings of citrus with certified materials where possible,” Oliver said.

Under the guidance of Jake Price, UGA Extension coordinator in Lowndes County, the expansion of Georgia’s citrus production started in 2013. Before 2019, Price estimated there were more than 72,000 trees in production on almost 500 acres. As many as 70,000 more trees will be added this year.

“There’s definitely still plenty of interest in citrus. There’s a lot of interest in satsumas. Tree availability is increasing, but you do have to order at least a year ahead of time,” Price said. “Growers have been encouraged to grow other citrus varieties besides satsumas to diversify the industry in Georgia.”

Similar to mandarin oranges, satsuma oranges are the most popular citrus grown in Georgia. Fruit from ‘Owari’ and ‘Brown Select’ satsuma trees is normally harvested between early November and Christmas. Satsumas decrease in quality quickly after they ripen and do not keep well on the tree.

If growers diversify their citrus production, it would allow them to extend their growing season. Most citrus varieties are not as cold hardy as satsumas, so producers assume more risk if they grow varieties other than satsumas or the newly released UGA citrus varieties.

The influx of citrus into Georgia increases the risks for disease buildup. Oliver said that the more plants in southern Georgia orchards, the more likely it is that pathogens will become problematic. Areas with a high density of plantings are especially vulnerable.

“Farmers should be aware of diseases for sure. If growers find anything suspicious, they need to contact their county agent,” Oliver said. “We haven’t found greening in our commercial plantings yet.  It is possible the bacteria is out there already in isolated trees, but since the psyllid vectors are not yet widespread, the bacteria is not going to be able to spread at this point — except through the propagation and import of infected trees.”

Clint Thompson is a news editor with the University of Georgia College of Agricultural and Environmental Sciences based in Tifton.
Authors:
Clint Thompson
Experts/Sources:
Jacob G. Price
Jonathan E. Oliver 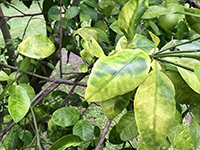 Invisible pest causes more than $1 billion in crop losses by taking control of plants’ natural processes Posted on 01/04/21 by Maria M. Lameiras
A newly published study led by researchers from the University of Georgia and several partner institutions reveals a discovery that could lead to new control strategies for a tiny-but-persistent agricultural pest that causes enormous soybean losses.
See More News Subscribe for Updates