After years of building and analyzing sample collections, plant pathologists at the University of Georgia have identified the genes that allow a type of bacteria that causes onion center rot to resist onions’ natural defenses in a “chemical arms race.”

The pathogen Pantoea ananatis can enter onions through the leaves — usually as a result of thrips feeding on the onion neck — and induces necrotic symptoms and extensive cell death in onion tissue.

When cellular damage occurs, onions and other members of the Allium genus, such as garlic, produce volatile antimicrobial compounds called thiosulfinates, the same compounds that make you cry when you cut onions and that give onions and garlic their characteristic smell and flavor.

These compounds normally kill invading bacteria, however an 11-gene cluster of the P. ananatis genome allows the bacteria to tolerate the thiosulfinate allicin and colonize dead onion tissue damaged in its initial attack, according to a paper published this month in the journal Current Biology.

Center rot of onion, caused primarily by P. ananatis in the Southeast U.S., can be economically devastating to producers, leading to high crop losses both in the field and postharvest, said Brian Kvitko, an assistant professor in the Department of Plant Pathology at the UGA College of Agricultural and Environmental Sciences and lead author of the study.

Kvitko’s research into this pathogen is important because the bacteria resist onion’s natural defenses.

“Onions are a tricky host. Anyone who has ever cut onions knows they release a very potent irritant that can kill some bacteria, but these bacteria have a one-two punch,” Kvitko said. “The onion releases thiosulfinate, a potent reactive sulfur species that causes gross damage to cells by interfering with all kinds of cellular processes. The bacteria have picked up genes that allow it to take the hit from the thiosulfinate and then take over the dead onion tissue environment as a home to make more bacteria. Like little genetic gas masks. The onion itself already had built-in antibiotics and these bacteria found a way around it.”

Kvitko said that these bacteria cause disease differently than most other bacteria, which either break down plant cells walls with enzymes or “reprogram” plant cells by injecting them with proteins.

“So, bacteria can chew up the plant cells or reprogram them, but this is neither of those. These are not proteins that are being delivered, it is a chemically focused kind of disease. This is not the only example of this we have seen, but it is very rare,” he said.

“These bacteria did not have any of the traits that were associated with a pathogen we knew. It was strange, but we didn’t know why. Now we have been able to find this different way of bacteria causing disease,” Kvitko said. “Knowing more about the pathogen and how it causes disease helps us find treatment and resistance strategies to manage this disease in the future.”

Onion center rot was first identified in Georgia in 1997 and can cause latent infections that are activated postharvest even if there were no overt signs of disease in the field.

“This is kind of an insidious disease in that the producer sometimes doesn’t know there is a problem until the crop is harvested, packed and shipped,” Kvitko said. “This disease is a big problem in onion-growing regions because bacterial diseases are hard to manage. There are a lot of diseases caused by fungi that we have fungicides to control, but we don’t have that kind of chemical strategy for bacteria.”

Although there are currently no identified onion cultivars with resistance to P. ananatis, knowing how a pathogen causes disease is a good step toward knowing how to find good host resistance, he added.

“To be able to fight something effectively, you have to know how it works. We know this thing is different. Knowing why and how it causes disease helps us to find a better way to fight it,” Kvitko said.

A key part of the research is the work being done by Bhabesh Dutta, assistant professor of plant pathology and UGA Cooperative Extension vegetable disease specialist on the UGA Tifton campus, who has collaborated with growers by collecting extensive samples of diseased plants for analysis. He then works with Kvitko on research both in the lab and in the field, an example of basic and applied agricultural research partnerships, which is a hallmark of collaboration and discovery at land-grant universities like UGA.

“We would not have made as much progress without Dr. Dutta’s long history with the systems and the good collection he’s been putting together for years,” Kvitko said. “The key thing that made this work wasn’t just collecting samples from diseased onions, but also from weeds in the fields and the thrips that are important in spreading the disease. That gave us a large panel of diversity to work from. We were able to look at all of the bacterial strains, even those that were very close to one another, to identify the genetic differences. We compared key regions of the genome that were only present in the strain that could infect onions. The genes that make specific regions of the genome different made the difference between which bacteria can and can’t cause diseases.”

With Vidalia onions at the top of the vegetable commodities grown in Georgia — at an annual farm gate value of $150 million — identifying the genetic traits of the bacteria responsible for the No. 1 disease in the state’s onion crop is an important factor in preventing financial losses for producers, Dutta said.

“There are 21 counties in Georgia with the marketing rights to grow and sell Vidalia onions, with nearly 65-70% of Vidalia onions being grown in Tattnall and Toombs counties,” said Dutta. “This is a high-value commodity for Georgia growers and this bacterial complex has become endemic in the Vidalia onion zone.”

While not all bacteria cause disease, Dutta’s research team has identified eight bacterial pathogens that are endemic to Georgia and which cause economic losses. Among the eight, one of the most prominent bacteria is Pantoea sp., which causes center rot. Other than Pantoea sp., Burkholderia cepacia —  the causal agent of sour skin disease — is also prevalent in Georgia.

Building on a collection started by his predecessor, Ron Gitaitis, in the 1980s at UGA-Tifton, Dutta has assembled a collection of nearly 250 Pantoea bacteria strains from a diverse variety of sources including onions, weeds and thrips in his research program.

“Identifying the strain of bacteria that causes onion center rot allows us to survey producer fields and, if Pantoea sp. is prevalent in the environment, but it is not a disease-causing strain in onion, it gives us the ability to assess the risk that producer might have for center rot developing in onions during postharvest storage,” Dutta said.

Now that they have identified the 11-gene cluster responsible for the allicin resistance, Kvitko’s lab can start studying those genes.

“That’s where we are now. We know they have a cluster of 11 genes, but we don’t know exactly how it works. Is it specific to this type of bacteria? Or is there a way to keep bacteria from turning that resistance on?” Kvitko said. “Knowing more about the system, we have a nice list of potential weak points we can try to target, either through host resistance or some sort of novel chemical strategy. Bacteria are really tricky to manage; we have a limited tool set to work with and we want to have more.”

Because it would be impossible to change all P. ananatis bacteria, Kvitko’s team will also use what they’ve learned to develop pathogen-resistant onions.

“We are trying to see if there is any onion out there that the pathogen can’t kill. Finding onions that are resistant to the chemicals that are released by the bacteria and giving growers accurate information is important for mitigation,” he said.

For more information on plant pathology research at CAES, visit plantpath.caes.uga.edu. To sign up for updates about Vidalia onion production from UGA faculty, go to site.extension.uga.edu/vidaliaonion. 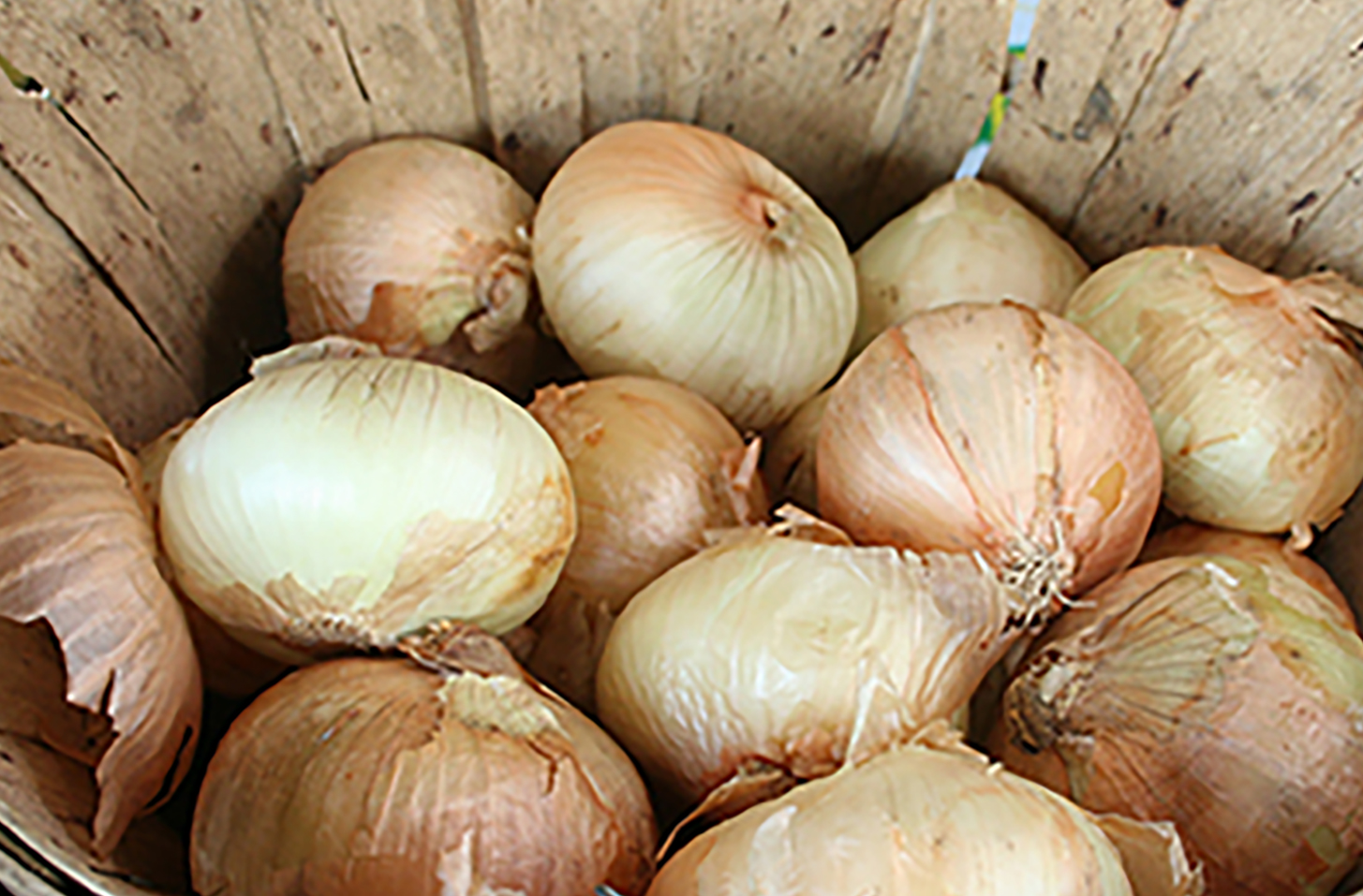