A new multistate project will bring together researchers from the University of Georgia and partner universities to fight Alternaria leaf blight and head rot in broccoli, a plant disease that thrives in warm temperatures and humidity.

Due to developing fungicide resistance, Alternaria blight and head rot have severely impacted brassica production, according to Bhabesh Dutta, an associate professor of plant pathology and UGA Cooperative Extension vegetable disease specialist who is leading the multistate project.

The team's research will build on previous surveillance work done in finding fungicide alternatives. Previous efforts to limit losses in fields have not been successful, possibly as a result of recent shifts in pathogen population and increasing resistance against fungicides.

The disease is a long-term threat that affects all brassica crops, which include cabbage, collards, kale and mustard greens. The fungus causes water-soaked spots on the head of the vegetable and dark, sooty, circular spots whose centers can fall out, leaving a shot-hole appearance.

The team of research and extension faculty will work to triangulate the disease by characterizing the pathogen or pathogens, host and environment. They will also develop diagnostic tools for identifying Alternaria sp., screen commercial varieties, and evaluate production practices including nitrogen levels and irrigation, which is how the disease spreads. The team will use what they learn to conduct economic assessments.

“The ultimate goal is to give a practical management option to stakeholders, ultimately limiting losses to this disease,” said Dutta.

Broccoli is a high-value crop that can be affected by a number of diseases. Head rot has been a particular concern in Georgia since late 2015, but it has been reported up the East Coast since 2013. Economic losses of up to 20% have been reported in some cases.

“Growers tend to overuse fungicides that are effective and, more often, that leads to the development of resistance,” explained Dutta. “Efforts to limit losses in fields and storage have not been successful, likely due to recent shifts in pathogen population and potential resistance development to ‘Quinone outside inhibitor (QoI)’ fungicides. This project will aid in developing molecular diagnostic tools for detecting QoI resistance in Alternaria, understanding the population structure of the pathogens, and developing management strategies that will reduce losses in broccoli across the production chain, maximizing productivity and profitability.”

An advisory panel of industry professionals, growers and other experts will provide guidance to the project, reinforcing the Eastern U.S. brassica industry as a team.

The production of brassica crops is a profitable industry for Georgia farmers. According to the UGA Center for Agribusiness and Economic Development, the state farm gate value for cabbage alone was nearly $42 million in 2018. Colquitt County is the largest producer of brassicas in the state, followed by nearby counties including Thomas, Grady, Echols and Tift.

For more information on the UGA Department of Plant Pathology, visit plantpath.caes.uga.edu.

Josh Paine is a marketing specialist with the University of Georgia College of Agricultural and Environmental Sciences.
Authors:
Josh Paine
Experts/Sources:
Bhabesh Dutta 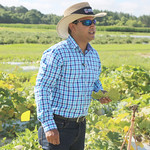