Elucidating the time/temperature conditions needed to kill Listeria monocytogenes on the surfaces of nuts and seeds will result in better risk assessment and lead to effective methods of control and prevention.

Nationwide microbiological testing conducted by the FDA revealed that the percentage of commercial avocados contaminated with L. monocytogenes on their skin was at least 17%. There has only been one reported foodborne outbreak linked to avocados and L. monocytogenes, but recent data from the CDC indicates that avocados may be linked to some sporadic cases. The existing literature on the potential risk of avocados as a source of Listeria is very limited. Those recent findings indicate the need to assess the potential for transference of cells from the avocado skin to the pulp, as a route of transmission to the consumers. In addition, it is also critical to determine if Listeria survives on intact skin during refrigerated storage to resemble distribution storage.

We conducted a series of laboratory experiments using Hass avocados inoculated with L. monocytogenes strains. Five L. monocytogenes strains were grown overnight in non-selective media, mixed and used to inoculate the surface of avocado skin. After drying, avocados were stored at 4 ºC and at room temperature and the viable counts of Listeria were determined over time using standard microbiological techniques. For determining the transfer from skin to pulp, avocados were cut with two types of knives. Avocados with un-disturbed cuts were kept at 4 ºC for 3 weeks and the count of Listeria was determined every week from skin and pulp portions exposed to the cut.

The Listeria viable count on avocado skins gradually declined from an initial count of 8 Log CFU during storage, but more than 2 Log CFU per skin spot were measured after 49 days. The rate of reduction was slightly slower at 4 ºC compared to room temperature. On skin samples adjacent to knife cuts the count of Listeria decreased only 2 Log CFU after 21 days at 4 ºC. Immediately after cutting the avocados, up to 10% transference from skin to the pulp was observed with 8 Log CFU skin inoculation. At smaller inoculums (6 Log CFU), the transference rate varied from 0.02 to 0.6%. No significant difference was observed based on the type of knives (smooth vs. serrated). The numbers of cells transferred to the pulp during avocado cutting increased after 21 days of refrigerated storage reaching 9 Log CFU/g in avocado with high inoculum levels and 7 Log CFU/g for those with low initial counts. This information will be valuable for other scientists, risk assessors and industry professionals to develop additional models, advance policy formulation and design effective interventions that may lead to reducing the risk of foodborne disease caused by avocados. 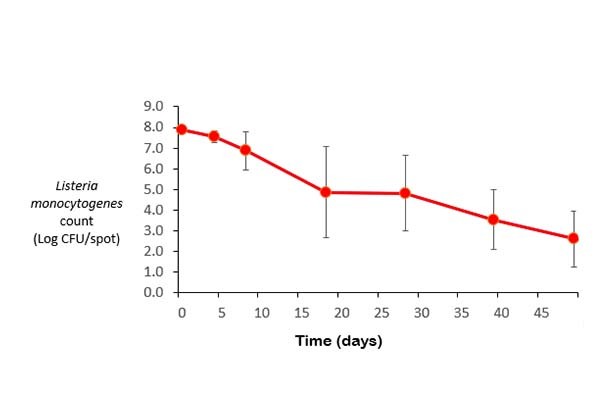 Fig. 1. Viable count of Listeria monocytogenes inoculated on the skin of avocados stored at 4 °C. 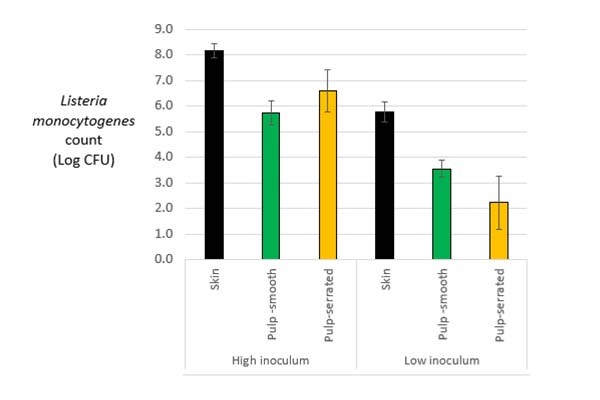 Salmonella enterica serotype Enteritidis is a major foodborne pathogen commonly found in poultry products. A pandemic of S. Enteritidis linked to poultry consumption started in the 1980s, quickly swept through continents and has since become endemic in multiple countries. While cases of S. Enteritidis have dropped in the US and Europe since the 1990s thanks to better Salmonella control throughout poultry production, the pathogen has still caused outbreaks in recent years, including the largest known Salmonella outbreak in Europe during 2015-2019 due to contaminated eggs. Despite routine application of whole-genome sequencing (WGS) in public health surveillance of Salmonella, how the pathogen moves across the poultry supply chain and what might remain as critical points along the chain for intervention has not been thoroughly investigated.

A total of 96 S. Enteritidis isolates were sampled from farms, slaughterhouses, chicken transporting trucks and retail chicken meats in South Korea during 2010-2017. The country’s integrated broiler supply chain is modeled after that of the US. The genomes of these isolates were sequenced. The movement and persistence of the strains along the supply chain were investigated using WGS-based fingerprinting of the isolates. Antimicrobial resistance and virulence gene contents in these isolates were profiled.

WGS allowed traceability of S. Enteritidis at the strain level throughout the poultry supply chain from farm to store. Resident strains on farms and within poultry processing facilities were identified. Transportation of live birds from farms to slaughterhouses by shared trucks may have caused horizontal dispersal of S. Enteritidis among broiler companies. The study also suggested that S. Enteritidis strains circulating in poultry in South Korea may have originated from a common source. 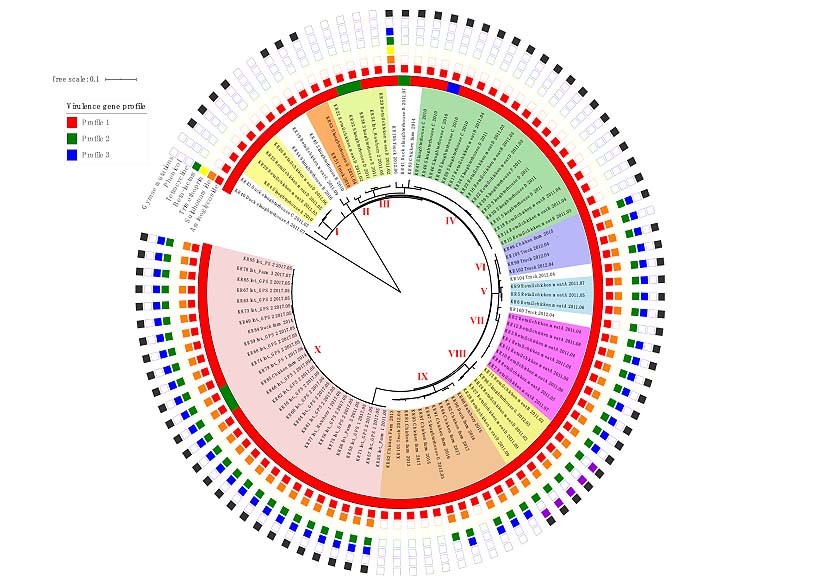 Research teams from the UGA Center for Food Safety (the lab of Dr. Henk den Bakker) and Purdue University (the lab of Dr. Haley Oliver) are working to map the microbiomes of grocery stores for a better understanding of the ecology of foodborne pathogens such as Listeria monocytogenes.

Every year foodborne pathogens sicken one in six Americans and impose an economic burden of over $15.6 billion in the United States. While infections with the foodborne pathogen Listeria monocytogenes are rare (an estimated 1,500 cases yearly in the US), a relatively large percentage of these cases result in hospitalization and potentially death. Listeria monocytogenes is ubiquitous and can be found throughout the farm to food continuum, however usually at a very low abundance. The low abundance of L. monocytogenes makes it cumbersome to detect, often it requires a process spanning several days using selective media. 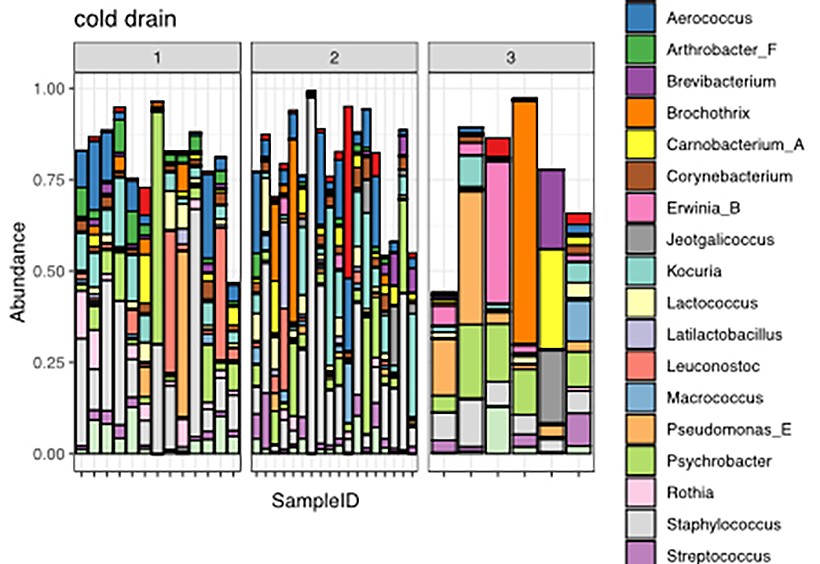 Progress on in vitro cultivation of Cyclospora

The objective of this study was to develop an in vitro method to propagate Cyclospora cayetanensis.

Studies aimed to learn the basic biology of this parasite are difficult because they cannot be propagated in animals. Any studies on Cyclospora including inactivation studies require the use of oocysts and the only source of oocysts is from individuals with Cyclospora infection. Studies to determine the efficacy of drugs and sanitizers are also challenged because of the limited availability of oocysts. To date, the ability of oocysts to sporulate has been an indicator of viability of the oocysts.

In this project, various cell lines were evaluated to determine their suitability to be infected with Cyclospora. In addition, various combinations of excystation media were tested. Cryptosporidium parvum was included in this study to optimize the microscopic observation and quantification of intracellular stages. Five cell lines were evaluated: Caco2 (colorectal adenocarcinoma, human), HCT-8 (colon adenocarcinoma, human), MDCK (kidney distal tubule, dog), RK-13 (kidney cells, rabbit) and CRFK (Kidney cortex, cat). Cells were grown in glass slides at 37C and 5% CO2 to semiconfluency in 16-well glass slides. Sporulated Cyclospora oocysts were treated with hydrogen peroxide followed by trypsin for various periods of time. Oocysts were rinsed and then treated with pancreatin, protease, cellulase, pepsin, lipase, and amylase for up to 2 h at 40C. Treated oocysts were then washed with F-12 media and resuspended in sodium taurocholate and then distributed in the wells containing semiconfluent cell monolayers. Cells were then fed with Dulbecco Minimal Essential Medium containing 3% fetal bovine serum and 3x antibiotics. After 48 hrs post inoculation at 37C and 5% CO2, cells were fixed either with methanol or Bouin fixative followed by 70% ethanol and sequential rinses with PBS. Cells were then stained with either Giemsa (for Cyclospora and Cryptosporidium) or by immunofluorescence (for Cryptosporidium) using mouse monoclonal antibodies to Cryptosporidium followed by a secondary FITC labelled goat anti-mouse polyclonal antibodies.

We successfully infected and quantified Cryptosporidium meront and gamont stages in Caco-2, MDCK, and HCT-8 cell lines. Cyclospora meronts were observed in MDCK and RK-13 cells. Optimization of this in vitro system would allow to maintain strains in vitro by asexual multiplication - as is the case with Eimeria – or even obtaining gamonts – as is in the case of Cryptosporidium. This assay would be used for biological studies, cellular biology and biochemistry of the parasite. It would also be useful for the determination of viability of oocyst in various research settings including clinical, environmental and in foods to evaluate control strategies. This method will also allow production of large amounts of parasite proteins to develop serological tests. 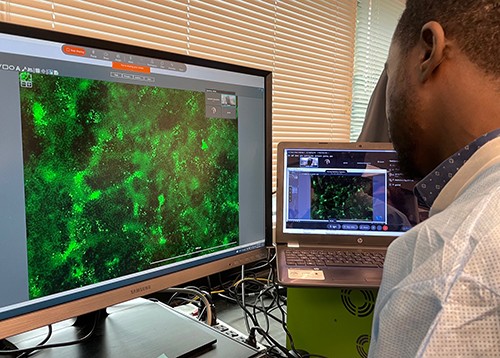