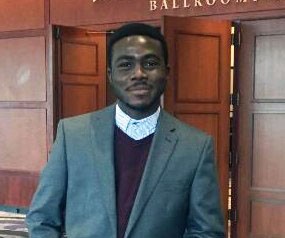 University of Georgia’s Center for Food Safety (CFS) graduate student Ikechukwu Oguadinma, or Ike as he is better known, presented at AOAC International’s Midyear Meeting which was held this March. Oguadinma’s talk titled, “For better or for worse: Antibiotic resistance in E. coli  O157: H7 and potential cross-tolerance to lactic acid” highlighted his team’s research findings. Oguadinma said one key finding was that antibiotic-resistant pathogenic E. coli O157: H7 might be more tolerant to lactic acid -- a common sanitizer used for decontaminating beef carcasses -- than the non-antibiotic resistant variant.

Oguadinma, who is part of CFS Assistant Professor Govindaraj Dev Kumar’s research group, spoke along with Eugene Ndieze as part of AOAC’s regional Southern Section. On the AOAC blog, President Erin Crowley called the student sections one of the highlights of the event and said of the students, “We were beyond impressed by them.”