Mann named 2020 employee of the year 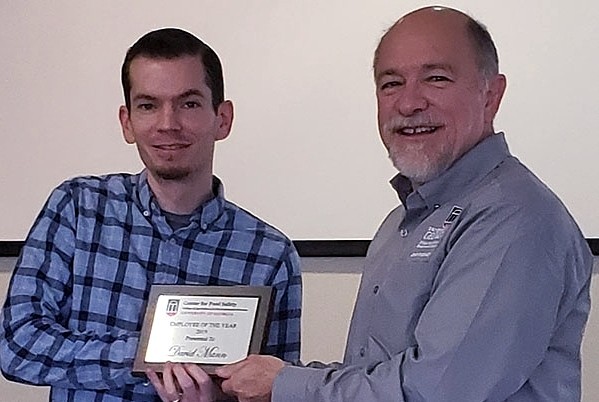 The Center for Food Safety Employee of the Year is an annual tradition that recognizes the work of one of our full-time classified staff members. The recognition is awarded to a CFS colleague who has performed exceptionally in their job duties over the past year and thus has been a valuable asset to the Center.

On January 22, 2020, David Mann was awarded the CFS Employee of the Year recognition.

To be selected, the employee must have been employed for at least one year. CFS faculty, staff, post-docs and graduate students select the awardee by secret ballot. This award carries an honorary plaque and a monetary prize of $300.

Mann began his employment with University of Georgia in 2001 as a part-time laboratory assistant, and after 16 years as full-time staff, he currently serves as a research professional II.

Throughout his employment at CFS, Mann has shown exceptional commitment to the mission and goals of UGA. He has distinguished himself for his versatility by contributing to a multitude of research projects throughout his tenure at UGA. He has been involved in the entire process of conducting food safety microbiology research, from the generation of ideas all the way to the publication of results in peer-review journals. He has worked with multiple foodborne microorganisms in projects that were aimed to study their ecology and interaction with foods and the environment.

Mann is an outstanding coworker who frequently exceeds the expectations of his supervisor and many other researchers at CFS who trust his expertise and support. He is a particularly gifted individual regarding his adaptability, given the fact that he has reported to five different principal investigators. He is currently a key research member with Dr. Xiangyu Deng.

The CFS staff feels very fortunate to have him as a key member of their academic unit.