Modeling to project trends of COVID-19 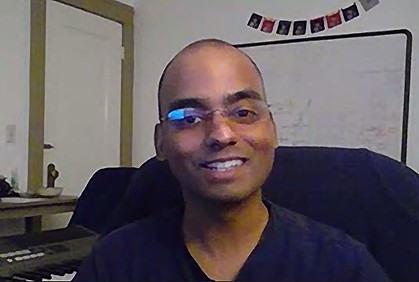 Ajitesh Srivastaava participated in the fourth round of CDC’s academic collaboration, called the COVID-19 Scenario Modeling Hub and answered questions during CFS’s webinar on modeling.

The Centers for Disease Control and Prevention (CDC) is using a tool to help project what might happen in the ongoing coronavirus pandemic in coming months. Called modeling, the tool does not seek to determine what will happen in the future. Instead, it is designed to help decision makers plan for what might happen based on current trends.

This process was the topic of a recent presentation hosted by University of Georgia Center for Food Safety (CFS) in which members of the CDC’s modeling team discussed recent findings in their quest to project future trends of COVID-19 within the U.S.

Jessica Healy, Rebecca Borchering and Ajitesh Srivastaava discussed the results of the fourth round of CDC’s academic collaboration, called the COVID-19 Scenario Modeling Hub, which was published in a CDC Morbidity and Mortality Weekly Report (MMWR) earlier this month. They also outlined the modeling processes they used.

Using a multigroup collaborative approach, four scenarios were modeled based on information that was available when the study began in late March. The modelers said that good models need specific data, but with COVID-19 there are still many unknown factors. Therefore, an ensemble approach was taken which they said allowed them to create a range of possible results.

Some of the variations between the four models include vaccination rates, social distancing and use of nonpharmaceutical interventions (NPI) such as face masks. They also included the potential effects of the B.1.1.7 variant, which was first detected in the United Kingdom and has since been found in the U.S.

From the four scenarios, the team projected the possible numbers of cases, hospitalizations and deaths. Results of the modeling showed that decreasing use of NPIs might lead to another peak, but that high vaccination coverage and effectiveness might cause a more rapid decline if a resurgence should happen.

Because of the many unknowns surrounding COVID-19, some factors were not considered in that round of modeling. One such factor is natural immunity from a COVID-19 infection. Because scientists do not yet know how long antibodies produced from infection last, modelers chose not to include that factor in their study but said that if better information can be obtained, they would include it in future models.

The modeling teams are currently at work on a fifth round of scenarios which presenters said will include “more of a focus on vaccine uptake and speed of saturation.” You can learn more about modeling at COVID19ScenarioModelingHub.org.