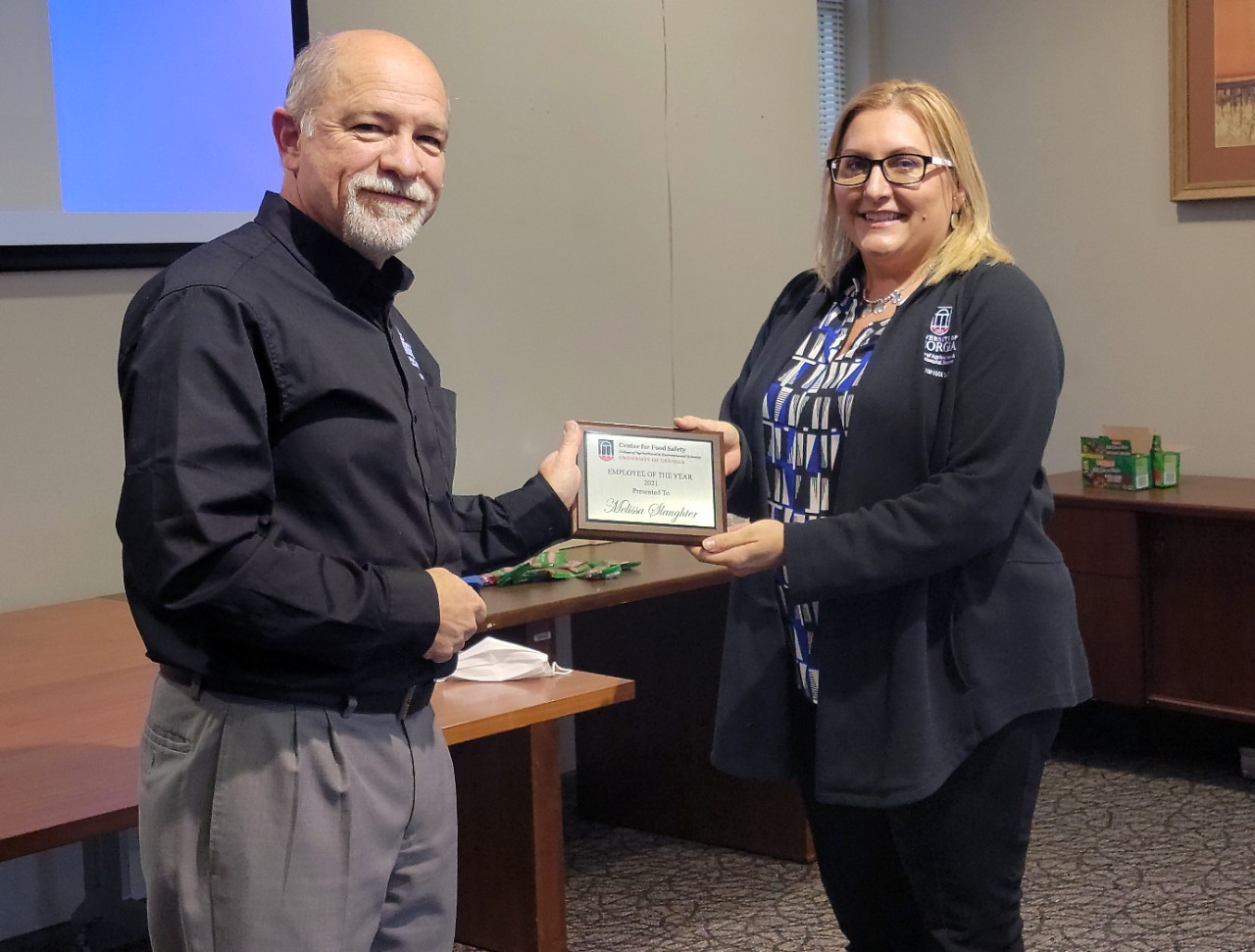 Francisco Diez awards Melissa Slaughter the 2021 Employee of the Year for the Center for Food Safety.

Melissa Slaughter has been named the 2021 Center for Food Safety Employee of the Year. CFS Director Francisco Diez-Gonzalez announced the winner during a hybrid in-person and streaming event held in the Melton Building on the University of Georgia Griffin Campus.

“We are honoring someone who has had a very valuable contribution to the mission of the Center for Food Safety,” Diez-Gonzalez said, and added that two qualities that make her stand out are “her remarkable enthusiasm and positive attitude.”

Slaughter was hired in 2019 as an administrative assistant. During her time at CFS, two members of the support staff have retired or taken other positions. As they have gone, Slaughter has taken on several of their responsibilities in addition to her own work. When she began, she was one of two people responsible for purchasing for the Center. Now, she is the sole purchaser. Additionally, she oversees requirements for shipping infectious substances and related materials and manages due dates for all employee and student biosafety certifications.

Yet the extra work has not stopped her from taking on numerous volunteer roles. Last May she was named the UGA Well-being Champion for the Griffin campus. She helps UGA employees use their numerous benefits which are not just limited to health care. She said there are options to offer eldercare support and even some legal assistance. Because the program is so vast, she said she spends a lot of time helping people discover what is available and walking them through the necessary steps to take advantage of the benefits.

This year, she took on the role of campus coordinator for the City of Griffin Annual Stream Cleanup leading the UGA Griffin team. The city-wide event sees groups volunteer to clean up area waterways by removing hundreds of pounds of trash and debris. Organizers make the otherwise unappealing task fun by leading scavenger hunts and giving away door prizes during the event. Slaughter said that she has participated in the event in the past and thought it would be something great for CFS to take on as a group. She said that the event allowed faculty, students and staff to meet outside the lab and to bond.

Though her days are busy, Slaughter also looks for ways to connect people and bring joy to the Center. Each Christmas season, she organizes Elf on the Shelf for CFS members, welcomes students and helps them feel at home in Griffin and even led party-goers in a Zumba style dance to “Thriller” at the Halloween party. Accolades from faculty, students and staff during the ceremony often cited her willingness to help others and her positive and cheerful attitude.

“It was such an honor to hear the kind words the faculty, students and staff shared,” Slaughter said and said that hearing the many ways she has been involved in CFS over the last year was “eye-opening” saying she did not realize she had done so much.